Bought this from eWheels a few months ago and have literally ridden it in front of my house 2 or 3 times, I’m just not meshing with it at all, it’s my first scooter and I come from a strong motorcycle background and have limited experience on electric unicycles, don’t know who can ride these things at full throttle but it sure isn’t me, especially at 51 yrs old. Never crashed or damaged and has no issues, paid $5,300, sell for $4,000 firm, no shipping, I’m in Chattanooga TN. 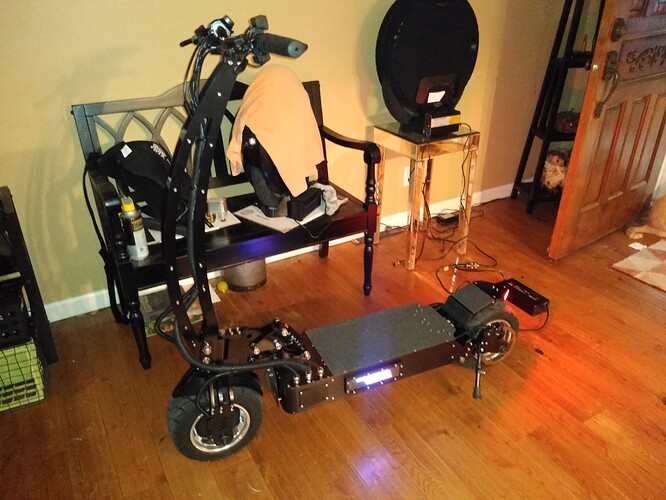 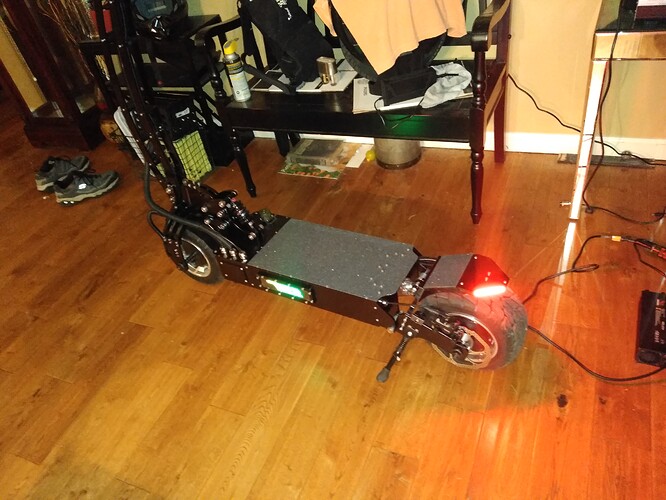 Yes and no, I made the mistake of riding it once more for just a few miles, it’s pretty amazing to be honest but I can live without it, I just received some new PMT tires for it, they were $200 so I’d have to add that to the price.

I’ve heard great things about the PMT tires. Will the original tires come with it? Also, I’m assuming there’s no issues mechanical or cosmetic? Lastly, does it have the cooling fans for the controller?

Not sure if you have an email I could reach you at, I can’t send a PM here. Just have a couple more questions and I’ll send an offer your way. Thanks in advance.

No cooling fans come stock, I have thought about adding them but I’m working 60+ hours a week so haven’t had time to do much of anything, I’m a mail carrier for the USPS and am getting slammed til after Christmas. No, no issues whatsoever, it might have 10 miles total on it with no accidents, no rain. Yes, it comes with the stock tires. The price is firm at $4200, I have $5500 in it, no trades no deliveries.

Is this scooter still available or did kyle buy it?

Never heard back so it’s still here, been working 70+ hrs a week so it’s been sitting.

Might have to get it. Ewheels warehouse burnt down and their new batch of gtrs have cooling fans pre installed since weped international took over. Some nice stuff. Might ask then for a kit to throw on if I get it. You said pick up only? Even if I were to pay for shipping and all that still pickup only right.

You know, I haven’t spoke with Jason about cooling fans, when I bought it originally, he said nothing about future GTR’s being equipped with them, he did say that the SST’s had some overheating issues after I pressed the question, that’s one reason I went with the GTR. But with that being said, this thing will get hot when climbing super steep hills with my 210 lbs at full throttle, I know this because my driveway is 1200 feet straight up a ridge, the one time I took it to normal riding area, it did fine but I don’t have the b***s to ride it in anything besides the 2nd speed mode, I’m sure doing full throttle runs in mode 1 (yeah 1 is the most powerful), you would experience speed limiting.
Yeah, local pick up only, it’d be a pain to pack this thing up and ship and I don’t have the original box, I thought about keeping it but the wife looked at me and shook her head no. Since we’ve been talking and a few others, I’ve sort of gotten Weped crazy so I’m not really wanting to sell it nearly as much as I did, I’m thinking of adding the garnish lights and taller bars and of course the tires, but if you want it the deal stands. Have you seen the new Wepeds, holy cow, super expensive but damn cool!!

Oh, I wasn’t implying that the future GTR’s would not be coming with cooling fans, I just was not aware of them being equipped with them.

The gtr and the new dualtron storm limited are very similar in specs. Honestly I’d rather go with the limited but with you’re price, I’d go with thus. The difference is not that significant.

I actually had a deposit on the Storm LTD and withdrew it, now it seems that they’re not reaching their top speed potential, maybe a software update would help, I think the Storm would be a better all around machine than the GTR due to the better suspension. I see eWheels has the Bronco Extreme in stock and they seem to have sorted the controller glitches they were having, that is where I’d be spending my money.

I was just gonna say you should get a bronco xtreme. Really the vest bang for your buck. The storm limited and gtr are like a slightly higher class up but the thing is still a monster. And yea I saw the problems with the limited. I was going to wait till they resolve the issue but I’m afraid it won’t be for a while so when I saw this and how stats wise it’s pretty damn close for so much cheaper I’m really taking it into consideration.

Yeah, I’ve almost pulled the trigger on one a few times already, I just have sooo much stuff right now, the last thing I need is to add another toy. I’m sort of curious about the new $5000 Rion Apex, I’m so impatient but considering giving a deposit when they become live, the year wait would be terrible…

I want to see the specs on the new rion apex as well. It’s at the price point of a gtr and the bed limited. Knowing rion it’ll prolly blow them all pit of the water. Might be worth the wait. How does the gtr rip though? Even though you only rode it a few times.

Oh yeah, the Rion will be better for sure, like you said, I’m curious to see the specs, especially battery. I’ve topped the GTR out in mode 2 for a few seconds, no speedo or GPS so I have no idea how fast I was going, I’m guessing around 40-45, of course you can be rolling about 20 and stab the throttle and it’ll spin the front tire profusely and I’m 210lbs, but top speed, I have no idea, it sure feels like 60mph is within reach.

Yea I saw a guy do 65 on it. He was a decent size guy and didn’t have much space to do it. I’m very interested as to what would happen if you lined the gtr, and the dualtron limited next to each other. Maybe throw the new apex and the bronco xtreme. Race them. My guess is rion win, then limited, than gtr, than bronco. Not sure. Soon my project scooter will be done and I already have someone who wants to buy it for 2.5k. That’ll give me plenty of money to hopefully grab this thing.

Actually saw someone do about 71 going downhill. It’s very impressive for only a 60v system. This and the limited are neck and neck

NOT with my old butt on it:)